Following my "interesting primary tables" post, this will take a look at many the same stats. The 2020 general election was quite an interesting night, As oppose to the primary which saw only 1 election turned by mail-in this election saw a drastic impact. Also the Rhode Island Board of Elections added a new stat "Blank Ballots" which is a tad odd... and stands out in a few communities.

First starting with the new data point this year "BALLOTS CAST - BLANK" for what I can only assume is a blank ballot that was cast by an individual. The 2020 General election saw 3,342 blank ballots cast of the 521,185 Total Ballots cast totaling 0.6% of all votes. Strangest of all, 1,540 of these were election-day votes, meaning they would have gone to the polls, waited in line in the midst of a pandemic only to leave their ballot blank. 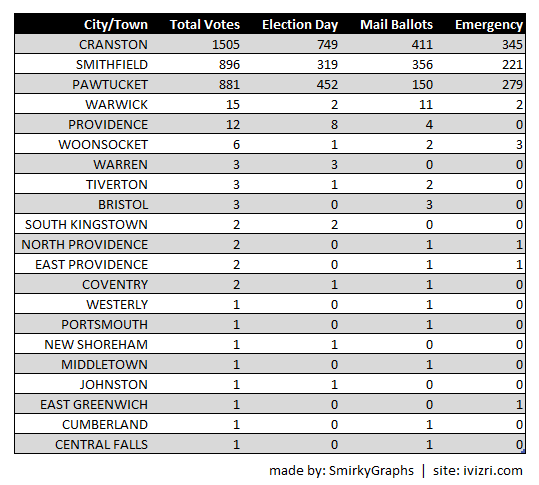 Far less interesting then the 2020 primary election for the Pawtucket Council District 5 race that resulted in only a 2 vote margin between the 2 democrat candidates. This election's closest single-vote race was a 35 vote gap in Central Falls Ward 2, which sadly only had a 44% turnout.